Connect and share knowledge within a single location that is structured and easy to search.

Twig syntax highlighting is a myth*

There is no such thing as Twig syntax highlighting on Stack Exchange. If you want to contribute to the development yourself, join the Google Code Prettify project.

* Prove me wrong, and I will gladly delete this post.

So there has been a lot of confusion about Twig syntax highlighting in Craft Stack Exchange. To begin with, there is this post asking for the Twig highlighting to be enstated in the first place. The kindly SE employee Shog9 said that he enabled Twig highlighting... but that doesn't actually seem to be true. I've asked for clarification on that comment thread, but he hasn't had a chance to respond yet.

After that, most folks went about their business thinking that Twig syntax highlighting was automatically happening any time you used a twig tag. Here's what is actually happening...

Just because you type something in and it looks like it's highlighted correctly does not mean the identifier actually exists in the system. Keep in mind that invalid identifiers revert back to default. (source)

In the "default" behavior, the parser will try to automatically determine which syntax to use... basically, it's just guessing.

Here is a list of supported language syntaxes... You'll notice that Twig is not on there.

To further back up that point, here is a screenshot of the options available for auto-highlighting which can be assigned to a specific SE tag... You'll notice that Twig is not on this list either: 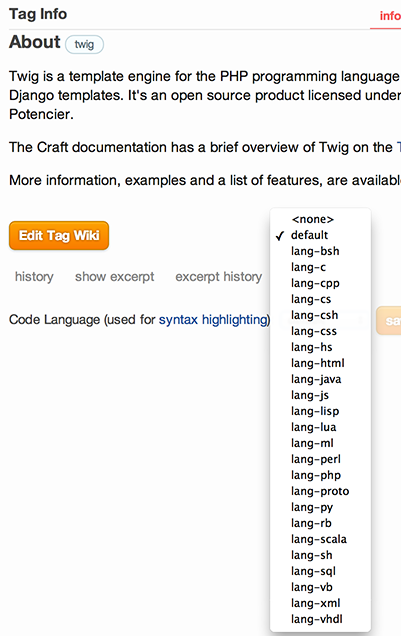 So why isn't Twig included?

You'll notice that Twig has never been mentioned in the development of this project...

Welcome!
This site is for discussion about Craft CMS Stack Exchange. You must have an account there to participate.
Help

7
How do we want to handle "plugins" & "plugin-dev" tags?
2
Temporary removal of twig syntax highlighting?
2
Should any automatic syntax highlighting be applied to Twig examples?
6
What is the best place to put a feature request?
1
Get rid of the "twig" and "template" tags?
0
Let's get critical: Dec 2014 Site Self-Evaluation
0
Let's get critical: Jun 2015 Site Self-Evaluation
4
Change list of reasons offered when voting to close a question?